How and why I became a yoga teacher

When you really think about it, it makes a lot of sense that I am a yoga teacher. I have been consistently practicing yoga since 2012 and meditate daily. My house smells like incense and I have a little Ganesha statue tucked away somewhere behind my collection of crystals. Heck, I even considered tattooing the “Om” symbol on my arm but then settled for something a little less obvious. Quintessential yoga teacher, am I right?

To my close friends and family, this whole yoga teacher training I plan on doing seems like the most commonsensical life decision ever. But to me, the thought of becoming a teacher never really seemed like an option. I mean, I love yoga, but teacher training… really? What about my career and all those things that I should become instead?

Unfortunately, my highly ambitious and career-focused mindset gave me a lot of anxiety. So when I quit my PhD, I figured that maybe I could actually be and do something else. Something more mindful, something more me.

The first spark in India

As is the case with many people, my love for yoga was not something that gradually grew over time. It was love at first sight. Back in 2012, I was just finishing up my undergraduate in Cultural Studies and felt like going away for a bit, before starting my master’s degree in Amsterdam. For some reason that is still unknown to me, I set my heart on doing a combined yoga and volunteer trip to Kerala, India. I never felt particularly drawn to India and don’t think I had ever done yoga in my life before, so that choice seemed random at best. But okay, there I went, off to India to do some yoga and stuff. Why not.

What I remember vividly from that time, is that as soon as I landed in India, I felt at home. I wasn’t scared one bit, not even when I had to survive a four-hour long reckless rickshaw drive. It all felt right.

Around that time in my life, I was mostly living in my head. Although I had never heard of anxiety or panic attacks then, I definitely had a tendency to worry A LOT, and I wasn’t flexible in any way – certainly not in my attitude towards life.

But the yoga classes I had there really had a profound impact on me. I was happy all the time – even when I had a severe case of the “Delhi belly” – and I slowly felt myself becoming lighter and more relaxed. It was already true love, back then.

So when our teacher advised us to maintain a daily yoga practice at home, I really took that to heart. I was set on making yoga a part of my life. 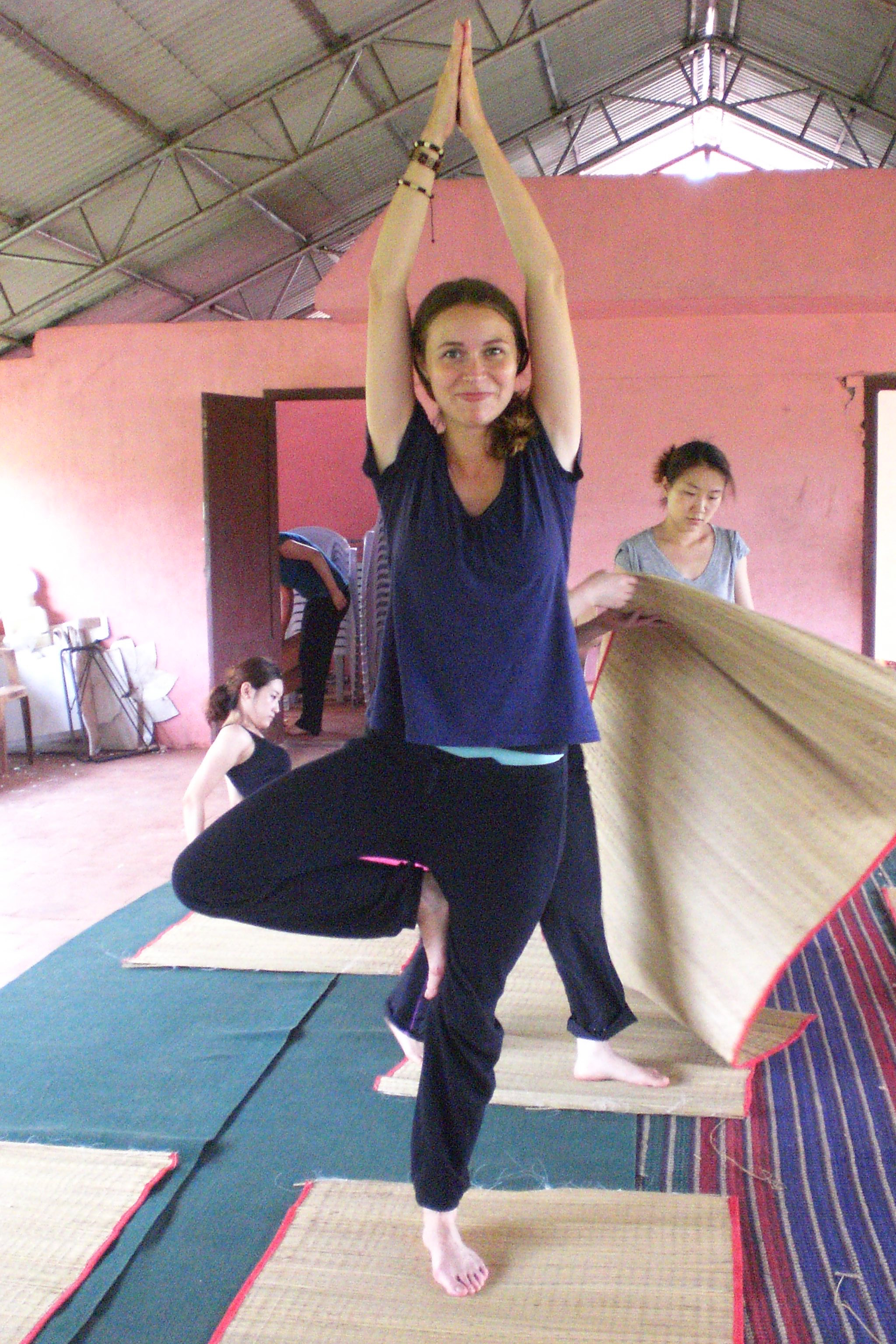 Bringing yoga to the Netherlands

As soon as I came home, I kept up with my promise. For the two years that followed I managed to practice yoga almost every day. Because I didn’t have the money to pay for the expensive yoga classes in Amsterdam, I mostly practiced at home. Luckily, I had discovered the amazing online platform EkhartYoga, so I never felt like I was missing out.

Of course, the daily yoga practice had a big impact on my life and personal growth, but only to a certain level. The reason why I don’t think all of the yoga fully landed in me, was because my practice was mostly focusing on the physical aspect of yoga. Although I wasn’t doing any particularly advanced poses – I didn’t have a live teacher, remember – my main focus was still to get better and stronger. The classes that I chose to practice were mostly dynamic hatha and vinyasa classes. Yin yoga, I thought, was something only old people did. I just wanted to be fit.

It’s not like I wasn’t doing anything with the more spiritual aspects of yoga. I did start my meditation practice around that time, and much of the wisdom I’ve harvested these past months is based on seeds I planted back then. But still. It was mostly the physical stuff that interested me. Not everything else.

On and off the bandwagon

In September 2014 I left Amsterdam for a long trip to Japan, Korea, Taiwan and Hong Kong. Naturally, my strict yoga practice had to make room for the more flexible mindset that comes with traveling. I did yoga occasionally and still meditated daily, but wasn’t doing it religiously anymore. In light of my travels, this of course made a lot of sense, but it was more than that. As I was traveling, I also realised that my crazily disciplined yoga days didn’t suit my life anymore. I needed some space to breathe.

When I came back home again, in January 2015, I had to start things from scratch again. Here I was: graduated, jobless and without a clear purpose. My devotion to yoga seemed like a thing of the past as I was struggling to figure out what to do next. I never fully stopped doing yoga, but my heart wasn’t in it anymore. Aside from a few great classes I took with Simon Rowe at De Nieuwe Yogaschool I wasn’t very inspired to do anything else. At some moments I honestly thought I was depressed.

I can be short about the two years that followed. I started my PhD in Wageningen. Moved to Utrecht in the same year. Met my current partner and started a relationship.

I was living the life of my dreams, or so it seemed. 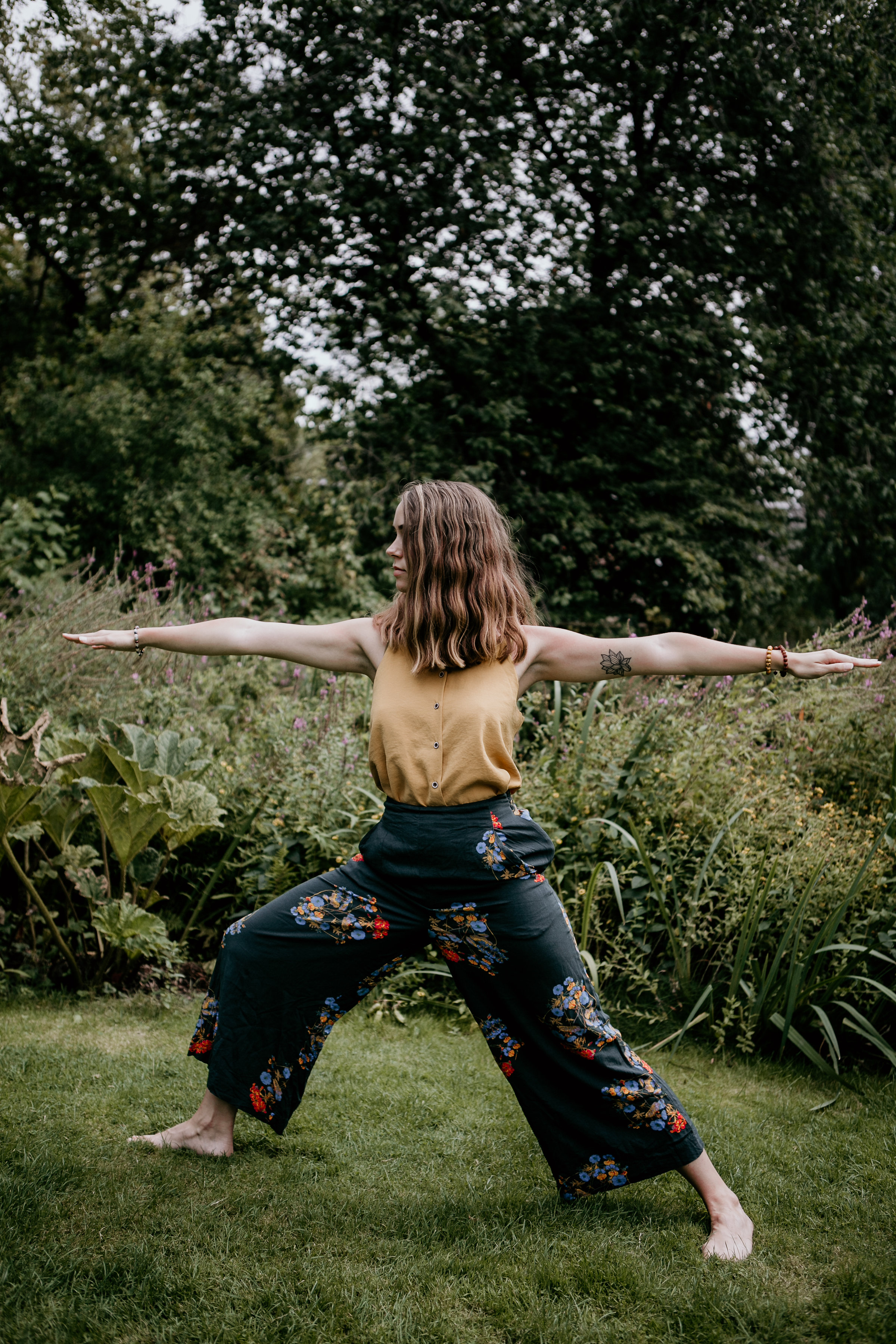 Then, in the spring of 2017, the panic attacks started. It was a truly confusing time and I didn’t really know what would help. The yoga classes that I occasionally did at home weren’t doing enough for me, so I started going to Yoga Point, a yoga school in town that offered cheap classes.

In addition to the money issue, one of the reasons why I almost never went to a yoga school in the past, is because I didn’t feeling like leaving the house. But things were different now. I needed to get out and to be around other people. I needed to not be alone.

It was as if I was discovering the magic of yoga all over again. Where I first thought yin yoga was for old people, it was now my practice of choice. Only when I was bending over my bolster for five minutes straight, could I truly relax and let go of my fears. And the more I practiced yoga, the better I was doing in terms of my anxiety. I realised that yoga wasn’t just another optional hobby. Yoga became a necessity.

It still took me a few months before I put one and one together. Clearly, I wasn’t happy with my PhD and the life that I was living, but I didn’t have any alternative either. The thought of doing yoga teacher training did come to mind a few times, but I wasn’t fully feeling it yet. I was waiting for that “Muß es sein?“ moment to hit.

Sure enough, that moment arrived shortly. On a Thursday morning in January, I went to another yin yoga class, given by Lotte Plessen, one of my favourite yoga teachers here in Utrecht. During the final relaxation, I suddenly felt all my doubts about quitting the PhD and becoming a yoga teacher subside. In that moment, I realised two important things. One, I can be whoever I want to be. And two, what I want is more yoga, what I want is to feel free.

As soon as that decision landed, I also knew some other things. Instead of the common intensive yoga teacher training programs offered all over the world, I wanted to do a longer program in the Netherlands. I figured that I had already exhausted and overwhelmed myself enough in the past few years, so doing something different would be wise. Plus, I didn’t want to shortcut my way towards a certificate so that I could start teaching withing a month. I wanted to take the time to really deepen my own practice first.

I also knew that I wanted to get a training that is rooted in the hatha yoga tradition. For me, hatha yoga forms a strong foundation that balances both the more active, vinyasa type of practice, and the more static, yin type of practice. It seems like a good place to start.

In my search for a fitting yoga school, the Saswitha yoga school came up first. When I found out that Esther Ekhart of aforementioned platform EkhartYoga did her training there, it felt like things were coming full circle.

In May 2018 I had my admission interview at the school. Cycling there from Utrecht already was a treat in itself. Arriving in the forest where Saswitha is located, I was greeted by the sight of lush trees and the calming scent of pine. It instantly felt like coming home. In September, 2018, I started my teacher training and life hasn’t been the same ever since.

Alert me We will inform you when the product arrives in stock. Please leave your email address below.
I use cookies to ensure that you get the best experience on this website. Got it.Privacy policy